I drive by this tree at least twice a day on the way into our garage. 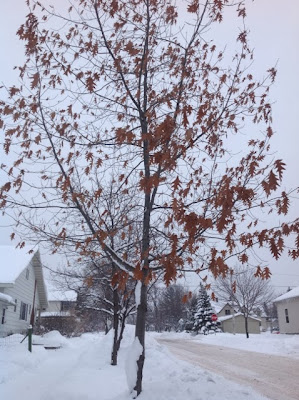 I don't whether to admire the tree's leaves' tenacity for hanging in there through strong winds, rain, sleet, and snow. Especially when all the other leaves fell weeks ago.

Or should I pity the tree for being in denial? 99% of local deciduous trees have shed their leaves. Snow looks beautiful on evergreen trees but doesn't look as nice on dried brown oak leaves.

All I can say is that one shouldn't have to rake leaves and shovel snow at the same time.
Posted by Angie Vik at 4:33 PM 2 comments:

Today is my son's 26th birthday. In honor of his special day, I'm sharing a favorite story from the Vik Family archives.

When our son, Andrew, was little, he was such a sound sleeper that he barely moved. We'd often watch to see if his chest rose and fell to make sure he was still alive. 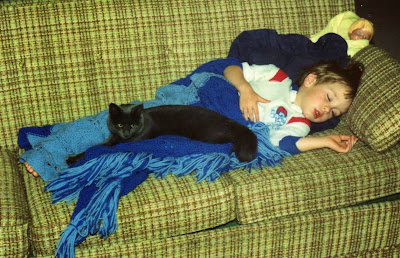 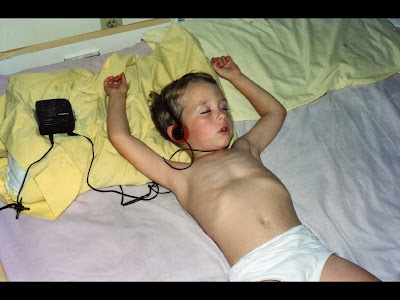 The worst time was when he was 13 years old.

In 2000, Keith and I had gone on a date, while fifteen-year-old Christina, our oldest daughter, babysat our six youngest children. We enjoyed a peaceful, relaxing evening away from our busy family, only to return home to an astonishing turn of events.

10:15 p.m. We walked in the house to find Christina downstairs reading. We assumed the other kids were upstairs in bed. When asked how things had gone that night, Christina said, "Okay."

Eleven-year-old Kiah walked downstairs and said, "Has Andrew come back yet?"

Christina sighed and put down her book, "I'm not sure." Seems while the cat's away, the mice will...fight. Christina explained that she had  a big fight with Andrew and he had grabbed a sleeping bag and stomped out of the house, saying that "He was going where no one could find him."

We left Kiah inside with the sleeping younger children, and took Christina outside to help look for Andrew.

Our eight acres were surrounded by 160 acres of soybeans. There wasn't much moonlight and our big yard light only illuminated so far. We looked for thirty minutes then called a neighbor who came over with a searchlight. We yelled and shined our flashlights all over the place. No Andrew.

We hoped he hadn't gone into our three-acre grove. Navigating our thick, tangled, overgrown grove at night would be nearly impossible. After an hour of searching, thirty minutes by ourselves, and thirty minutes with the neighbor, we started to panic. Where was he?

11:30 - The police wouldn't help until we had called Andrew's closest friends to see if he'd gone to their houses. His friends lived five miles away. Surely he hadn't walked to town?

We felt foolish calling people that late at night, but his friends hadn't seen him.  We wondered what they thought of us? How do you lose a child from your house?

11:45 - Andrew had been missing for two hours. A police officer showed up with a bigger, more powerful searchlight. He grilled Christina who had been the last person to see him. We all yelled Andrew's name, shining lights everywhere.

12:15 - We were panicked. Was he hurt somewhere? Perhaps unconscious? Was he hiding and purposely not answering? Had he run away? The policeman offered to call in a bloodhound.

I rested my head on our van's steering wheel and prayed, "God, you know where he is. Please help us find him."

I shone headlights into the soybean field again. Between the van and soybeans stood an old white picnic table. I looked hard at the table and thought it looked thicker than normal.

I walked over to the table, overjoyed to see Andrew sleeping on it. I drove off to find Keith. We drove back and parked five feet from the table. Keith honked the horn a few times to alert the searchers that we had finally found Andrew. We kept the headlights shining on him, amazed that he was still sleeping.

How had we missed him before?  Andrew was small for his age and very skinny. Wearing a black stocking cap and snuggled down inside a black sleeping bag, his small size and black bag had made him almost invisible.

I called his name a couple times, thinking he should go inside and sleep in his bed. Since he was obviously in a deep sleep, totally oblivious to the activity going on around him, Keith said to let him sleep where he was.

What was more unbelievable? That we had looked for two and half hours for someone who was sleeping fifty feet from the house or that Andrew had slept through people yelling his name, cars driving on and off our property, lights shining everywhere, and the van's horn honking five feet from his head.

We thanked our neighbor and the policeman and sent them home, everyone relieved that the lost had been found. A few hours with a missing child was awful. I can't imagine what parents who never find their children go through.

The next morning was sunny and peaceful. Keith watched out the kitchen window as Andrew woke up. His little head poked out of the sleeping bag and he looked around, disoriented to where he was and why. Andrew walked inside and Keith asked how he had slept.

Andrew yawned and said, "Fine." He had absolutely no recollection of all the chaos he had caused.

Unfortunately this episode didn't cure the kids of fighting. They had a few more "incidents" but I am happy to say that our kids have grown up to like each other and are good friends now.

I see Andrew watching his four-month-old daughter sleeping and when he leans closer to make sure she's still breathing. I smile and think, "What goes around, comes around." 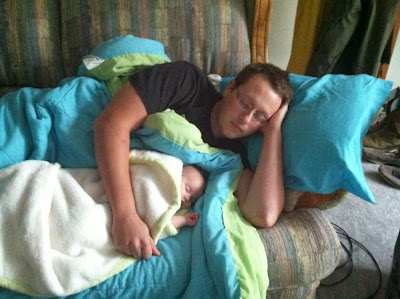