In Honor of Erica's 22nd Birthday 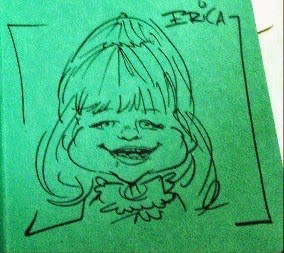 Our Middle Child turns 22 today. In honor of her birthday, I've compiled a list of the cute things she said and did when she was little. One of the privileges of motherhood is being able to embarrass your children whenever you feel like it.


Erica from America (Proud of this one - I came up with it.)
Hairy – She was born with a lot of hair 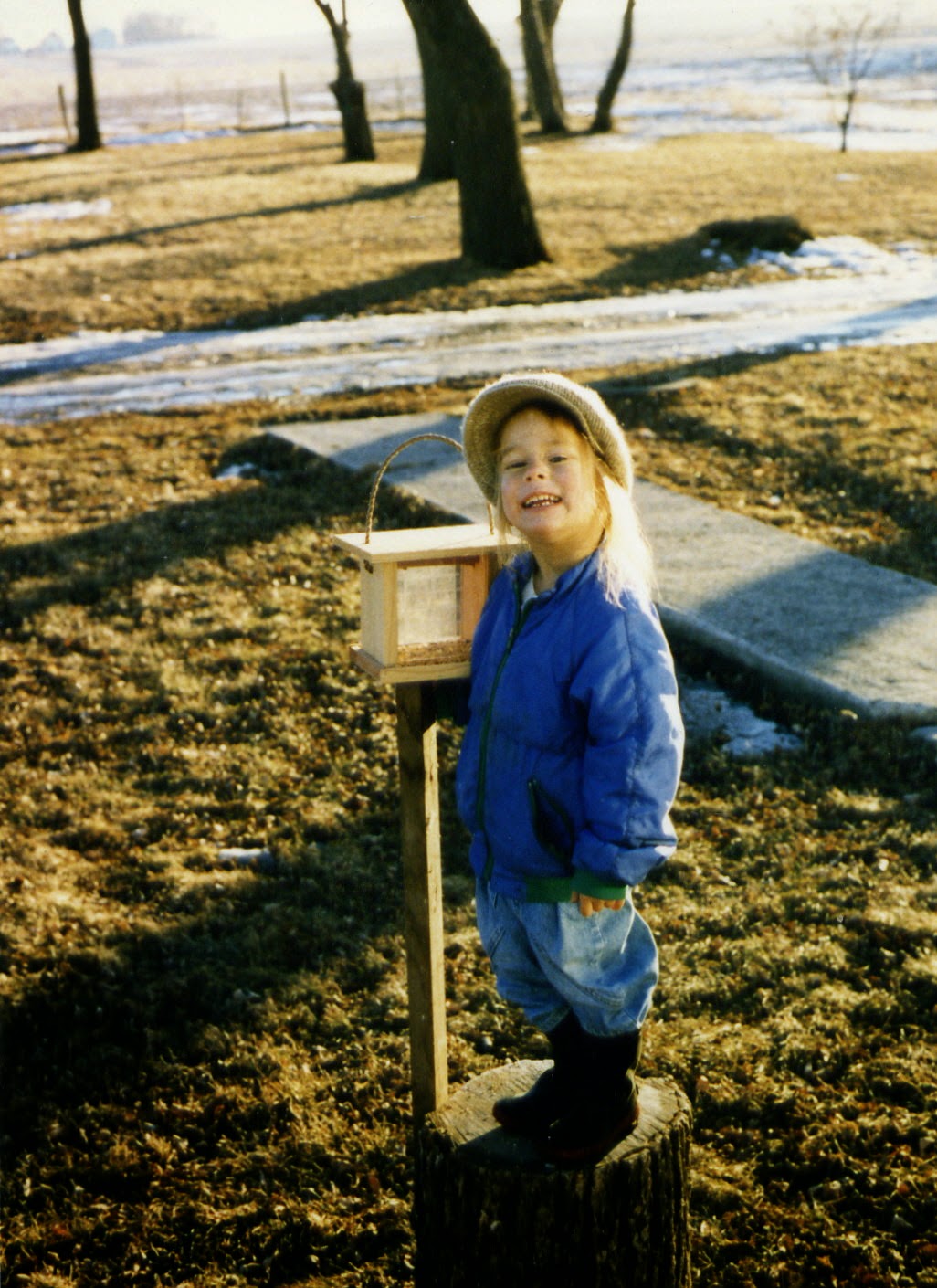 Fun Stories
Hide and Seek – November 1993
One evening we couldn’t find eighteen-month-old Erica. We lived in a small two-bedroom basement apartment so there wasn’t many places she could be. Finally we found her stuck under our bed in one of the underdrawers. We all had a good laugh while Keith figured out how to get her out.

Not Hard - November, 1994
Kiah (5) stubbornly refused to eat her banana. She held up the banana and said, “I can’t get it open.”
Erica (2) walked over, took Kiah’s banana, very easily opened it, handed the peeled banana to Kiah, and said matter-of-factly, “There.”


It was afternoon rest time and Erica (2) was up goofing around. Kiah yelled, “Mom, why isn’t Erica resting?”


Erica yelled back, “BECAUSE, Kiah!”

A Different Perspective - December 2, 1994
I took Erica (2) to the grocery store one evening. As we walked to the car she noticed blinking Christmas lights down the street. She said very seriously, “Mom, the lights go off and on.  Off and on.” I thought this was funny because adults would say “On and Off” but she had it the other way around.

Comforting Words - January 11, 1995
We had all come down with the winter crud. Erica (2 ½) was very sick and wanted comfort. I held her and said, “Mommy loves you Erica.”
She replied, “Yes.”
Then I said, “And Daddy loves you.”
To which she again said, “Yes.”
I finished with, “And Grandma loves you.”
Then she sweetly and seriously said, “And Erica is very happy.” 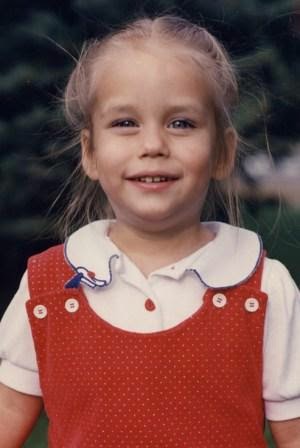 Imagine- August, 1995
We were visiting good friends in Colorado Springs.  We had taken three-year-old Erica to their downstairs bathroom earlier in the day. Before we left, we took Erica to the upstairs bathroom.
Erica looked around wide-eyed and said very seriously, “Is this a different bathroom?”
“Yes, it is,” I answered.
Then Erica said, in a voice full of wonder, “Imagine.  Two Bathrooms!”
We’ve had one bathroom for as long as she could remember. In her mind, two bathrooms was sheer luxury.

Not Beating Around the Bush – August 1995
We had gone over to Keith’s bosses’ house for dinner. We also knew them from church and our children must have been feeling at home with their family.
After dinner and been served and everything was cleaned up, Erica (3) went up to the hostess and said, “Do you got any cake and ice cream?”
We were embarrassed and later explained to Erica that it wasn’t polite to ask for dessert.

Equally Yoked – December 1995
We’d explained to our children that it’s important to marry Christians when they grew up.  We’d gotten a Christmas letter from friends who’d shared that their seven-year-old daughter had become a Christian that year.
Three-year-old Erica’s face brightened and she said seriously, “Then I can marry her.”

True Confessions – October 1995
At Faith Baptist Church one morning, Pastor Dave asked the congregation, “Do any of you have any unconfessed sin?
Three-year-old Erica pipes up, loud and clear for everyone to hear, “Yes!”

Good Advice – January 15, 1996
Christina (11) was out of sorts and grumping at her siblings. Erica (3), tired of Christina’s rude remarks, yelled at her, “Respect your elbows!”

One hot day I was checking for cucumbers in the garden. I thought I had found them all but Erica (4) found one more. She held up the cucumber and said, “Aha! Apparently you didn’t look thoroughly.” We laughed, thinking “apparently” was quite a big word for a four-year-old.

All the kids had come down with bad colds at the same time. One night Erica (5) had a fever and was dozing on and off. She woke up, mumbled, “I don’t care what you say, my fever hurts!” and went back to sleep.

Ouch! - May 6, 2003 – Erica wrote this when she was eleven-years-old.
Today we are playing with our imagination and we wrapped tape around our ankles and
wrists and called them “Laser Beams.” We tried to shoot each other.
Amy got carried away and wrapped tape all the way to her knees! Later she tried to pull it off. Her legs were red for an hour. 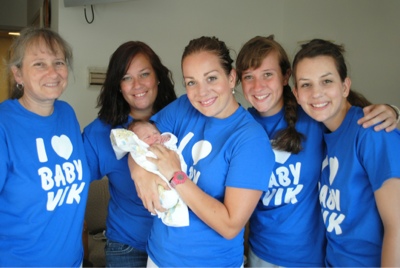 Today Erica (second from left) is a proud aunt and has fun chronicling the fun antics of her favorite niece.

Love ya, Sweetie. Hope you have a great birthday. Glad that you're part of our crazy bunch. 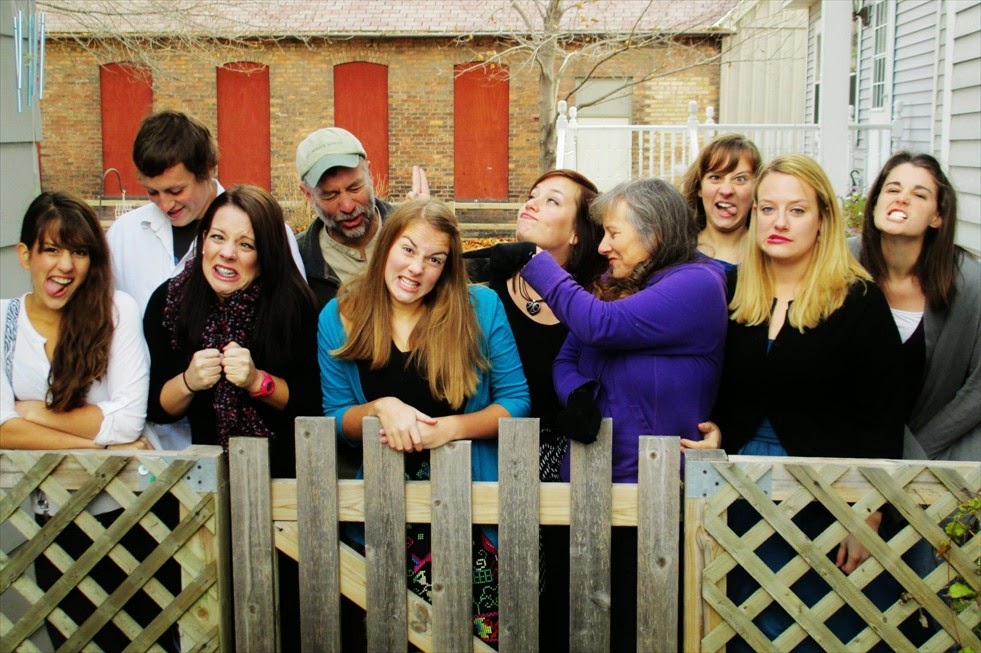 On a more serious note, I wrote this blog post for Erica's 17th birthday.
If interested, click here to read.
Posted by Angie Vik at 2:10 AM 2 comments: