My oldest child Christina, is always looking for new adventures. This summer's challenge was the 2.1 mile Point to LaPointe open water swim on Lake Superior from Bayfield to Madeline Island in Northern Wisconsin.

The swim was a fundraiser for the Bayfield Recreational Center. Bayfield is a half hour north of our house and almost as far north in Wisconsin and you can go. LaPointe is a fun tourist town across the bay on nearby Madeline Island, which is part of the Apostle Islands National Lakeshore.

When Christina signed up to boldly go where no Vik has gone before, the family rolled their eyes and said "encouraging" things like,
"Why would anyone want to do that?"
"Are you sure you can swim that far?"
"Will there be lifeguards?"

A determined young lady, she is. She planned. She trained. She prepared.

As the big day approached I pondered how to see the race. Watching her swim would be harder than watching a cross-country meet. I could watch the swimmers take off but couldn't get to the other side to see her finish. Then I had a great idea. Every swimmer has someone kayak near them in case anything goes wrong. A friend from church agreed to be Christina's kayak support. If he took a two-person kayak, I could be the second person. Brilliant, I know.

I asked Brendon if I could ride over with him. He politely asked if I had talked to Christina about this. No, I hadn't, but I didn't see why she'd care - she'd be in the water.

Christina walked in the room about then and got wind of my request. She wasn't so polite. "Mom, you can't do this. Our support teams have to be experienced kayakers. You've never been in a kayak."

I didn't see why that mattered as long as Brendon was experienced. I would be just a passenger, he'd do all the work. :)

The full impact of my request hit me and I knew she was right, but didn't want to admit it. When I stopped to think about it, I probably wouldn't want to be out one mile from shore in a small kayak. Only if the lake was very calm would I even consider it. The odds of me bailing were high. Plus the race started at 7:00 am. Watching people swim that early is not this nightowl's idea of a good time. I withdrew my request, but not because Christina didn't think I could do it.

About this time someone remembered that I had a Ladies breakfast to attend that same morning. Drats. I'd forgotten all about that. Keith and a friend ended up going to watch the race. They saw her take off and took the ferry over to the island (way easier than kayaking) and watched her finish, while my friends and I ate eggs and bacon at the Lake Rock Cafe.

450 swimmers participated in three divisions:  Male competitive, Female competitive, and community swimmers. Christina was in the last group. The men left first, then the women, and then Christina's group. 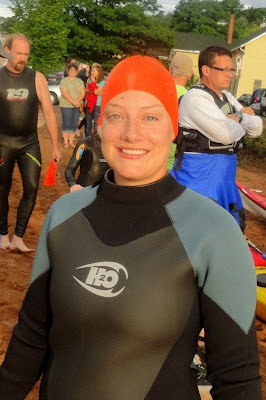 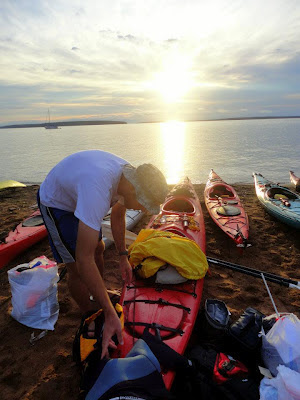 See the front kayak hole - that could have been my spot.

Before long, swimmers and kayaks were spread out all over the two mile route. Christina plugged valiantly away.

(Later, after the race, Brendon's Mom said, "I don't know how much help he'd of been if she struggled. Would he just be marking the spot where she went down?" I'm so glad she hadn't shared that cheerful thought before the race.) 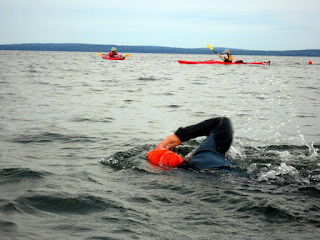 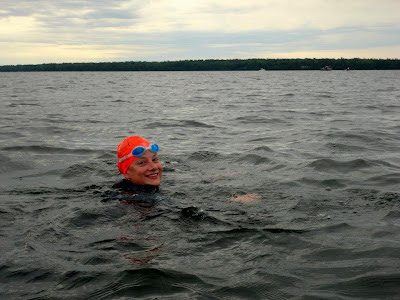 She finished with a time of 1hour and 55 minutes 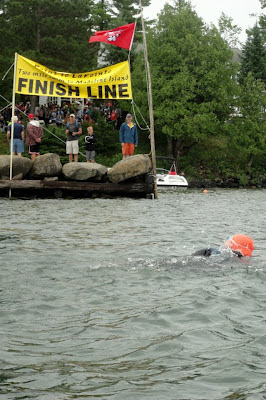 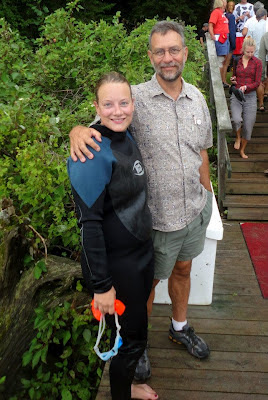 Afterwards she kayaked two miles back to Bayfield with Brendon, worked six hours, and rode four hours to Minneapolis for a party. Kids these days.


Here's a one minute video of her finish.

Bless her determined heart, she was one of the last people in her age group to finish. But we're all amazed that she made it and think that simply attempting and finishing is a wonderful thing. I'm pretty sure I couldn't swim two hundred yards even if it mean winning a year's supply of free Taco Bell Chicken Burritos.


We're proud of Christina and enjoy vicariously participating in her adventures. 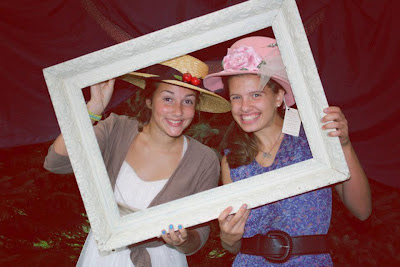 Lani and her friend Anna (not be confused with my Anna) 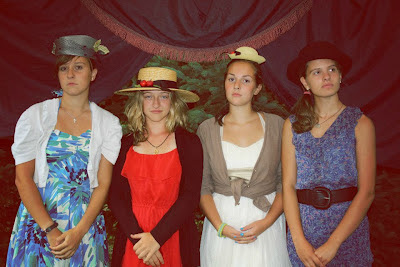 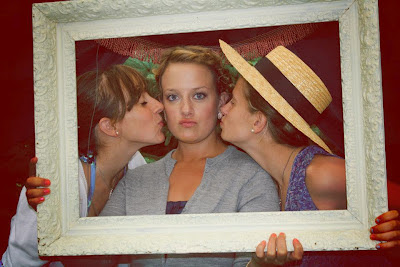 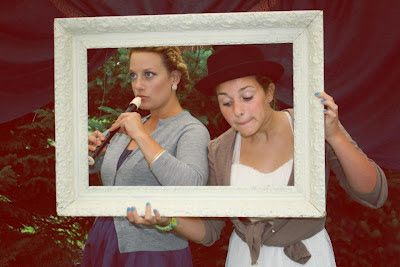 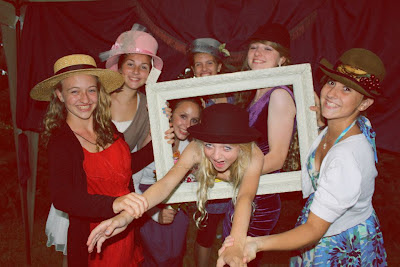 Lani and Amy with friends

I love how these turned out and could kick myself for not getting my Anna and Kiah into the act. I would have loved a picture with the five of my girls who were there. Next time I'll pay better attention.
Posted by Angie Vik at 5:30 AM 4 comments:

Some Words Should Not Be Abbreviated 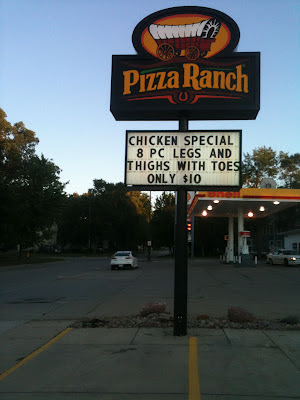 We assume "toes" is short for potatoes but one
should probably ask first to verify that before ordering.

For He will give His angels charge concerning you,
To guard you in all your ways.
--Psalm 91:11--


(I hesitate to share this story lest people think I'm flaky. After reading this, you can draw your own conclusions.)

Ours is a mixed marriage. I like camping, Keith doesn’t. I think it’s wonderful, he thinks it’s chaotic. I finally started taking the kids camping by myself.

To our delight, when we still lived in Iowa, we discovered Palisades State Park in Garretson, South Dakota, just an hour from home. 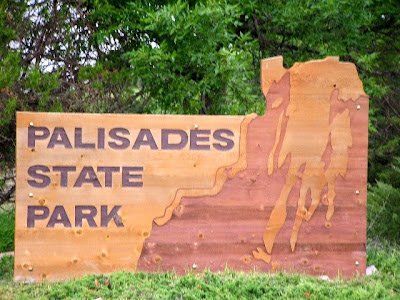 Garretson resembles Northwest Iowa. After driving through miles of cornfields - we weren’t quite sure what to expect. Then we found the park and and were properly awed. The park hugs a river that cuts a fascinating path through a few miles of cool red rock. We loved the rock formations and fun nooks and crannies. 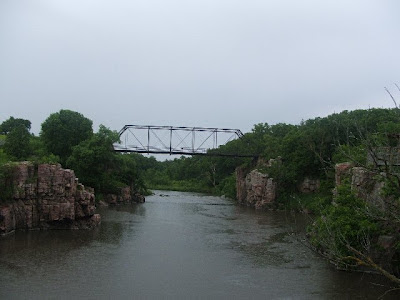 In September, 2006, the four youngest girls and I camped there for the first time.


They absolutely loved crawling all over that park. Hiking doesn’t accurately describe their approach. They climbed, crawled, hung over edges, waded, and stopped to look, talk, take pictures, throw rocks, sing, read signs, and pick up shells, rocks, or pinecones. Lots of fun and fresh air, but probably not much exercise.

I couldn’t sleep the first night and kept tossing and turning. The weather forecast called for a 40% chance of thunderstorms. One of my quirks is a big fear of severe thunderstorms. I didn’t want to be in a tent in a bad storm. I heard thunder in the distance and prayed it wouldn’t come our way. The wind picked up a little and I couldn’t drop off.

The girls slept peacefully, oblivious to their mother’s insomnia. About 1:00 a.m., I prayed, “God, please help me get to sleep.”

Shortly after, I heard a car drive up. I peeked out of the tent and saw my husband’s car and thought, “How sweet. He came to check on us.”

He walked over and unzipped the tent. I wondered where to put him since we were already cozy. I scooched over a sleeping child, and unzipped a sleeping bag to lay over Keith and I. He laid down beside me, wrapped his arm around me, and I snuggled into his embrace and quickly fell into a deep sleep.

Thankfully the storm went around us. The next morning I woke up and didn't see Keith. Dazed, I sat up and looked all around the tent but he simply wasn’t there. Erica saw my confusion and asked, “What are you doing?”

She looked at me like I was crazy. “Most likely at home.”

“No, he came. Last night, after you girls went to sleep. He must have went to the bathroom.”

I peeked out of the tent and his car wasn’t there. I used a cell phone to call him. He was home, and had been all night. He suggested that I had probably been dreaming.

I couldn’t have been. It was so real. I don’t remember before or since having such a vivid dream. Who had come to my tent?

The next night, there was no wind or distant thunder and I had no trouble sleeping. When I got home I described the “dream” to Keith. I wondered if it had been an angel.

Keith said, “I don’t know what happened, but you asked God to help you get to sleep and He did.”

Maybe this was a God thing, or maybe it wasn’t. In any case, I like to think there are a few angels in heaven who like camping. If the angels could visit the shepherds “camping” in the fields after Jesus’ birth, surely they could find Garretson, South Dakota.

I love these two verses from Taps.
(Picture this accompanied by a mournful trumpet.)

Taps
Day is done,
gone the sun,
From the hills,
from the lake,
From the skies.
All is well,
safely rest,
God is nigh

I'm linking up with Jennifer at Getting Down With Jesus. 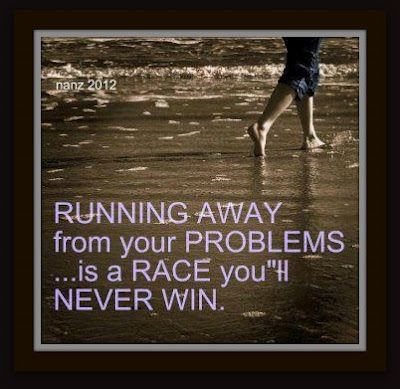 
Linking up with Lori for Think Quotes It's Friday
Posted by Angie Vik at 9:27 AM 5 comments: 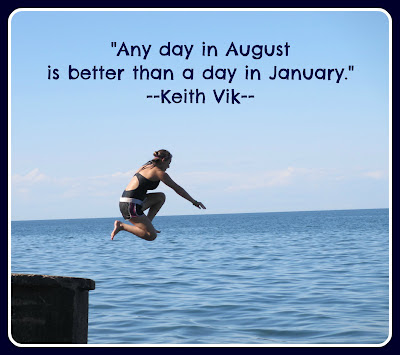 Linking up with Lori today for Think Quotes - It's Friday.
Posted by Angie Vik at 5:45 PM 5 comments: