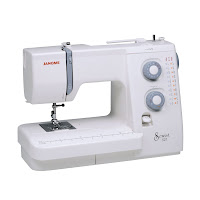 It has been brought to my attention by my daughters, my husband, and his aunt that I haven't posted for awhile. I don't have a good excuse, other than a lot was going on in August and blogging slipped through the cracks, along with other things like cooking and cleaning.

I wanted to share my 19-year-old daughter, Anna's, project. I dragged her to a quilt show last fall. Very interesting but these quilters were light years ahead of my beginner quilting skills. To our great surprise, Anna won the door prize of a Jelly Roll and backing fabric.

I might not have the terminology right. A Jelly Roll, as I understand it, which means I could easily be wrong, is a roll of pre-cut three inch wide strips that can be assembled into a quilt.

The plan was for Anna to make a quilt for her new niece. First Anna needed to learn how to sew. She caught on pretty quick. I pinned, she sewed, and Lani pressed the seams.

Anna got busy and the quilt lay unfinished for months until Cailin's birth motivated her to give it another go.

She was inspired by this picture we found on Pinterest. 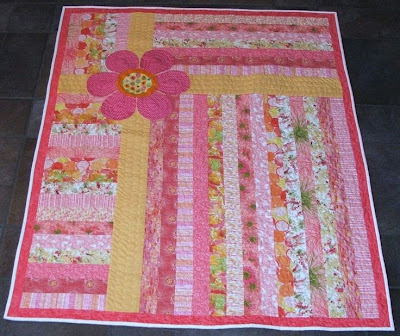 After Cailin's arrival, Anna went on a sewing binge. She wanted an appliqued heart instead of a flower. I had never appliqued before so was thankful for Pinterest tutorials. She took the finished quilt top to a local printing place and had them embroider Cailin's name on the quilt.

I took over from there, dismayed to find the embroidery had pulled the heart tight so the edges were fraying. I restitched the heart a few times (any real quilters reading this will most likely shudder at our quilting greenness and mistakes.)

Here's the finished product. It's pretty big so she'll be able to use it for a few years. 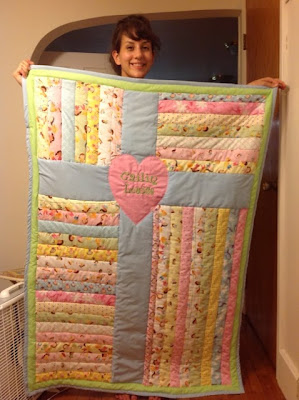 The name shows up better in this picture. 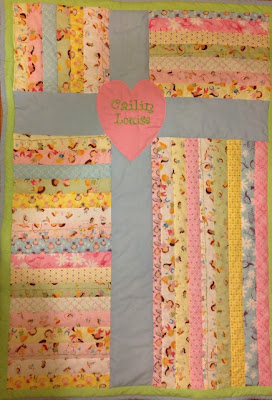 We didn't mean to sew a cross but think it's fun that one showed up.

I'm dragging Amy and Lani to this year's quilt show this Friday, hoping lightning strikes twice and we win another door prize.
Posted by Angie Vik at 7:33 PM