And last but not least:  The 30th anniversary of our first date 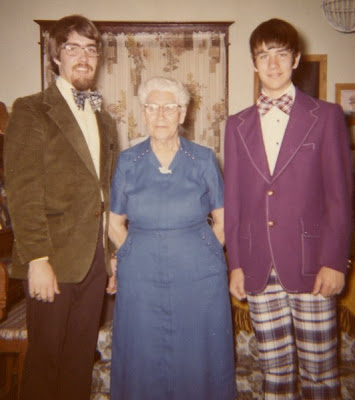 He had improved considerably by the time I met him. 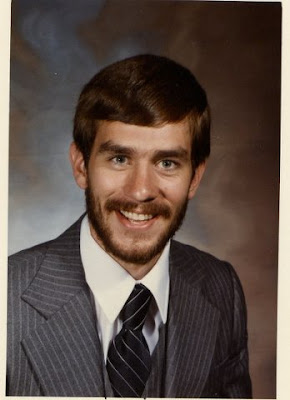 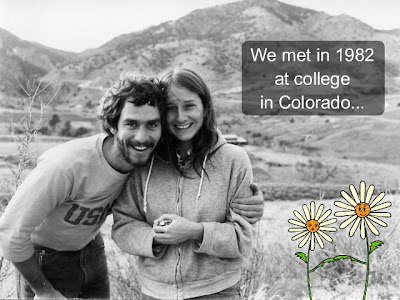 Keith and I started dating January 22, 1982. You can read the nitty gritty details here.  We didn't hit it off well at first. I thought he was a nerd. He thought I was ditzy. He was pretty rigid and I was hopelessly fluid. I noticed his gray flowered shirt and assumed his Mother bought his clothes.

I know better now. He picks out his own clothes and loves flowered prints. When he preaches Sunday mornings, I look at him and marvel. One Sunday he's in a suit coat, the next he wears an ugly sweater. Sometimes he shows up in a dress shirt and tie, or a sweater vest, or an Hawaiian shirt.

I think he closes his eyes and reaches into the closet and wears whatever his hand lands on. 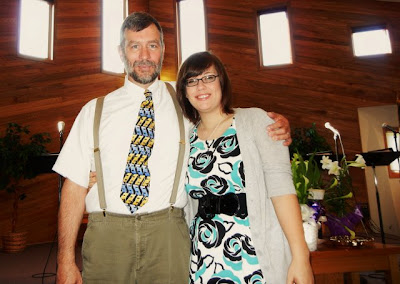 I rest my case.

Anyway, back then I also noticed his eyes. Later when we were dating I told him I liked his blue eyes. He claimed they were green and we argued for years over their color.

We now have a blue-eyed daughter and a green-eyed son.

An early memory is a spur-of-the-moment evening drive to Red Rocks Amphitheater in Morrison, Colorado. Before seat belt laws, a bunch of our college friends crammed into a suburban. Keith, another guy, and I squished into the space behind the back seat.

A smidge awkward since I didn't know either guy. The guy on the right had a girlfriend and wasn't interested in small talk. Keith, on the left, being the poster child for Serious Students Inc. wouldn't talk either. I made sure to grab a different seat on the way home.

We started being friends on a double-date. Keith asked my friend to our Fall Banquet and his friend asked me.

A month later, when he heard I didn't have enough money to attend a Josh McDowell conference, paid my way. We still rarely talked at this point so he was just being nice.

At Christmas, home-bound students crammed into a fellow student's car to ride to the airport--his destination Iowa, mine California. Bad weather cancelled flights and we spent the night in the airport, him on one concourse, me on another. If we'd only known then that we'd get married three years later we could have visited and got better acquainted.

As I mentioned before he was a serious guy. Serious about his faith and his studies. Focused, intense, and very responsible. Though he was older, I was a year ahead in school.

Somewhere in the spring of 1981 he must have realized there was more to me than the ditzy person he thought me to be. We played games in the student union with friends and every so often would end up talking afterwards. Once he even walked me to my dorm.

Then one day he asked me to pray with him. We walked up to this pretty spot on campus and prayed together. Something happened that day but I didn't understand what. I wasn't interested in him but looking back I know that our hearts had started to knit together.

We played many games of Rook and Dutch Blitz with friends and he started to loosen up. At the school year's end, he happened to be walking into the Spring Banquet the same time as me and two friends so he sat at our table and hung out with us the rest of the evening.

My friends had the bright idea of staying up the whole night. Keith had never done this before or since and knowing him now, I'm surprised he agreed. We even toilet papered a friend's house which was another first and only for him.

My first "Whoa Nellie" moment came after we'd known each other a whole school year, getting acquainted in small increments. One night I asked him for a ride to my friend's house. I explained where I needed to go and asked if that was on his way. He said it was, which was a bold-faced lie. I later learned it was an hour drive both ways.

At the risk of sounding corny, it was an enchanted evening. We had a good conversation and when we got to my friend's house no one was there. We played backgammon while we waited. I remember being drawn to him but feeling confused because up until that point I had never been interested in him. I looked at him, noticing again his blue eyes, and wondered if he affected everyone that way or was it only me.

Before we left for the summer, me to California, he to a summer missions' trip to England, he stopped by my dorm to give me two take-your-faith seriously books.

He sent two postcards from England but except for the backgammon night nothing really had sparked between us. Just a friendship for which I was thankful. He was a neat guy and I had learned a lot from him.

School started in the fall and I was a junior and he was a sophomore. I expected to pick up where we left off but something had changed. No games, no jokes, no conversations. He sat in front of me in a class for half the semester and didn't talk to me.

In November, a switch went off and he started talking to me again. And they say girls are hard to figure out! Gradually we started talking more. A friend asked if I liked Keith as it seemed like we got along well. I assured her that wasn't the case, stating that we were just friends.

So on January 22, 1982, after a year and a half of being friends, when he finally stammered out that he was interested in me I was truly in shock. I had honestly thought we were just friends, but as soon as he spoke up I immediately knew that I wanted to be more than friends.

I'm historically an indecisive person. I agonize over decisions and make long convoluted pro and con lists. This was one of the few times in my life when I didn't hesitate. I thought about what I knew of him, his responsible, steady, stable character and without a doubt instantly knew that if he was offering I wanted to go along for the ride.

God knew at that point, but we sure didn't, that we had just begun a 30 year journey. I'm glad we were friends for so long as that allowed us to get to know each other without the pressure of being romantically involved. 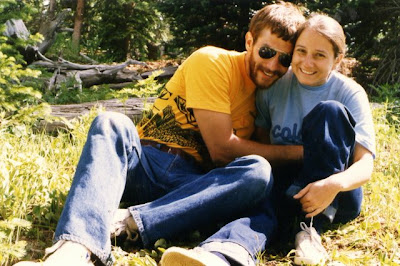 So thankful for 27 years of being married to my best friend.
Happy Anniversary to us!
Posted by Angie Vik at 10:57 PM

Labels: About Us, Angie, Anniversary, Keith