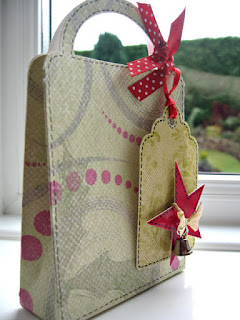 I picture God sometimes giving us our days in a pretty gift bag. He waits in anticipation for us to open it, saying, “I know you’re going to like this.” My husband Keith recently opened a very fun bag.

This spring a middle-eastern pastor spoke at our church. He lives in a country where it is illegal to convert from Islam – so for his safety I can not say his name or where he is from.

He told story after story of his underground church and our hearts broke to hear about a place where it is a crime worthy of death or prison to worship the God of the Bible.  We hear his stories of faith under fire and we realize how much we take for granted the precious freedom of religion we enjoy in America.

Keith and this man have kept in touch weekly since March. They share their joys and concerns and pray for each other. It’s neat that the hearts of two men who live a world apart have knit together. Though they come from different cultures, they worship the same God. They hoped God would allow their paths to cross in person again some day.

Keith was talking to his friend on our recent vacation. His friend was in America again on business. He asked if there was any way we could get to St. Louis to see him. When Keith said we couldn't, his friend asked where Keith was.

His friend said that he would be in Colorado the next day.  He then asked where Keith was in Colorado.

His friend laughed and said that he would be in Colorado Springs as well. A friend of his had offered to fly our friend and his wife to Colorado for a few days of R & R to regroup physically and emotionally after some stressful situations.

We spent two wonderful hours together the next day, utterly amazed that of all the places in the U.S., we “just happened” to be in the same city on the same day. We live 1200 miles away from Colorado Springs and our friend lives 6,000 miles away.

We think we are in control of our lives and choose where and when we want to go. Then something like this happens and it makes you wonder.

I'm linking up with Jennifer for